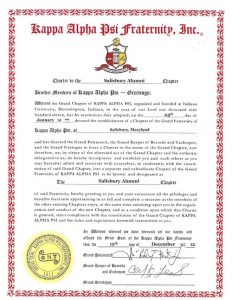 Why should The Salisbury Alumni Chapter of Kappa Alpha Psi celebrate its History?

The fundamental purpose of Kappa Alpha PSI is “Achievement”. The statement goes on to add “In Every Field of Human Endeavor”. How well this sets the stage for this rendition of our History.

Our Revered founders though Dreamers as they were called were both Realist and Doers. We must admit that they were some pretty smart guys. Can you believe that in January, 1911, that they began laying a foundation for a future that could not be destroyed through now and beyond? Well they did it and here’s how.

“The answer is “All of the ABOVE”

We will make an attempt here to “Affirm” and Re-affirm the spirit of Kappa Alpha Psi as it has existed in the Past, as it does at “Present” and as it will continue in the “Future”.

The Past represents Kappa’s Foot Prints in the sand. Here we must affirm the efforts of our 10 Great Founders. We give special note to the work of Elder Watson Diggs for his vision, but we can’t forget the work of Guy Levis Grant in setting the Legend. Many played key roles in making this history but it was left to a few that it would be told. Dr. Grant was involved greatly in both the making of the History and the telling of the story. If not for his collection and preservation of various source materials, there would have been no factual nor supportive basis for this History.

We all know that the thing that has lasted longest in time is the Pyramids of Egypt. They start with a strong foundation and slowly graduate to an apex at the top. Kappa Alpha Psi laid out its pyramid when it stated its objective in its constitution.

The strong foundation is in its promotion of the Spiritual, Social, Intellectual and Moral welfare. Then the steps ascend to the unity of men of Culture, Patriotism and Honor who pledge their assistance to society and strive to inspire service in the public interest. Finally, at the top (the Apex), the crown is “Achievement”, where we encourage Honorable Achievement in every field of Human Endeavor.