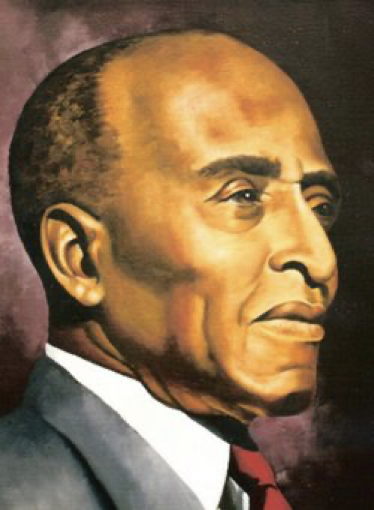 Founder Edward Giles Irvin, a civic and religious leader, journalist and entrepreneur, was born August 13, 1893, in Spencer, IN and was the seventh of nine children of an African Methodist Episcopal minister. Following graduation from Kokomo Indiana High School in 1910, he enrolled at Indiana University the same year. While attending Indiana University, at only 17 years of age, Irvin was the youngest one of ten Black students who assisted to found Kappa Alpha Psi® Fraternity, Inc., in which Irvin served on the fraternity’s Incorporation Committee.

Irvin and the other Founders endured and persevered acts of racial hatred and hostility as students, then organized this fraternity dedicated to the principles of achievement and to alleviate the isolation and raise the sights of Black undergraduates. Irvin left the University following the spring term of 1911.

After leaving the University, Irvin pursued a career in journalism until World War I. While serving the U.S. Army during the War, he was a Combat Medic and was cited for bravery for his actions with the Expeditionary Forces in France. He served on the Selective Service Board during WWII and the Korean War. He received the 2nd highest medal that is given by this country for valor. He also received two Distinguished Service Awards, from President Truman and Eisenhower respectively.

Following his honorable discharge from the Army he met Maywilla, who became his wife. He subsequently moved to Indianapolis and was on the staff of the Indianapolis Freeman, the first Negro newspaper in the nation with pictures. In 1922, he established the Shining Star, a weekly newspaper based in Anderson, IN. He subsequently moved to Gary, IN in 1923, to become the editor of the Gary Sun newspaper. Irvin moved to Chicago, IL, in 1928, to work as the sports editor for the Chicago Daily Bulletin newspaper. After it collapsed, he worked at the U.S. Post Office and became the owner and operator of the Afro-American Manufacturing Company a distributor of candy, novelties and specialty items. Irvin was a long-time member of the Chicago (IL) Alumni Chapter.

Irvin enjoyed sporting events and sponsored basketball and track events at small schools in Indiana. Deeply rooted in the community, he was also an active member of the Masonic order, the Odd Fellows, and the St. James African Methodist Church. He was also a trustee of St. James A.M.E. Church in Chicago and founded and edited the lay newspaper, Voice of the A.M.E. Laymen. He was also a member of the Faculty at our own University of Maryland Eastern Shore for many years.

The Fraternity’s last living Founder died on November 4, 1982 and is survived by his daughter, Dorothy Manyweather. He is buried at Burr Oak Cemetery, in Alsip, Illinois, a southwest suburb of Chicago, Illinois.