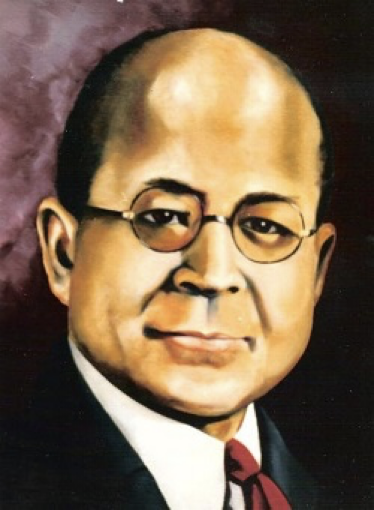 Founder Elder Watson Diggs, was quiet, polished, scholarly, a prolific writer and commonly referred to as ‘the Father of Kappa’. He was born in Hopkinsville, Christian County, Kentucky, on December 23, 1883, and was the eldest son of three children. Diggs and his brother (William Ellis) and sister (Effie) were reared by their mother, Cornelia.
He received a one-room school education in Louisville, Kentucky, where he helped teach the younger children. Following graduation from Indiana State Normal School in the spring of 1908, Diggs enrolled at Howard University in 1909. While a student there, he developed a friendship with fellow Hoosier, Byron K. Armstrong.

Diggs was an educator who held teaching positions and served as principal at public schools throughout Indiana. Diggs was married on three occasions (Clara Bell Smith, Elizabeth Byrd and Lyla P. Roberts). Clara Bell and Lyla were both teachers and Diggs assumed Clara Bell’s teaching responsibilities once they became married since female teachers were not permitted to teach in the state of Indiana at that time. Clara Bell and Elizabeth preceded Diggs in death and Lyla died less than 30 days after Diggs passed.

When the U.S. made its declaration in World War I against Germany, Diggs resigned as principal and entered the nation’s first Negroes Officers Training Camp at Fort Des Moines, Iowa and was commissioned a First Lieutenant. After serving in Europe with the 368th Infantry, he rose to the rank of Captain in the Army Reserve Officers Training Corps. Diggs also was a past commander of the American Legion. Subsequent to the war, Diggs was instrumental in having the Indiana constitution amended to permit Negro enlistment in the Indiana National Guard.

Based on the hostile attitude and circumstances facing Blacks at Indiana University, Diggs decided to establish a fraternity on campus to give African-Americans support and sanctuary based on high Christian ideals and the purpose of achievement. Diggs assisted Byron & Irven Armstrong in designing the Coat of Arms, assumed responsibility for preparing the initiation ceremonial forms, completed the fraternity’s constitution and took a course in Greek heraldry and mythology to ensure the fraternity was rooted in authenticity. He was one of two Founders who pawned his watch to pay for the Fraternity’s incorporation fee.

Diggs wrote the lyrics to the Kappa Hymn. Additionally, he established the Kappa Alpha Nu Journal, the first periodical of any national Black college fraternity. He served as Grand Polemarch for the first six years of the fraternity’s existence. He also served as a Grand Board Member and as Grand Historian. He also established several of the initial undergraduate chapters in addition to the Indianapolis (IN) Alumni Chapter. Diggs was awarded the first Past Grand Polemarch’s medal and the first Laurel Wreath. He also assisted in writing The 1928 Handbook of Kappa Alpha Psi.

The Elder Watson Diggs Award, the second highest award available to celebrate a member’s achievements or service to the fraternity is dedicated in his name. The Elder W. Diggs Memorial at Indiana University was constructed in his honor in 1962. Diggs died November 8, 1947. Following his death, School #42 was named in his honor where he served as principal for 26 years. Diggs is laid to rest at Crown Hill Cemetery, Indianapolis, Indiana.